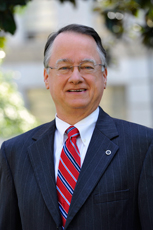 Nick Tennyson was named as Secretary of the North Carolina Department of Transportation in August 2015. He is the former two term mayor of Durham from 1997-2001.  The newly named Secretary also served as Executive Officer of the HBA of Durham, Orange and Chatham Counties for almost 20 years from 1995-2013.  Most recently, Tennyson as the Chief Deputy Secretary of NC DOT.