Home  »  BASE   »   BASE Shares in 2017 Best Governmental Affairs Initiative Award 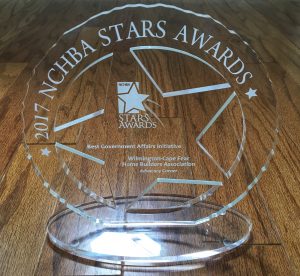 In October, our partners at the Wilmington-Cape Fear Home Builders Association (WCFHBA) were awarded a STARS Awards from the North Carolina Home Builders Association. The STARS Awards program honors the achievements of those who make major contributions to the residential home building industry. Winners were announced at a ceremony held on October, 12th at the Charlotte Convention Center as part of the 21st Century Building Expo & Conference.

The 2017 Best Governmental Affairs Initiative was awarded to the Wilmington Home Builders Association for the monthly Advocacy Corner web series, which features WCFHBA Executive Officer Cameron Moore and BASE CEO Tyler Newman discussing a range of critical industry and business issues. For example, you can check out the June episode here (filmed “live” in DC).

We are excited to share in this award with WCFHBA and appreciate the continued ability to assist the organization in meeting its advocacy goals.