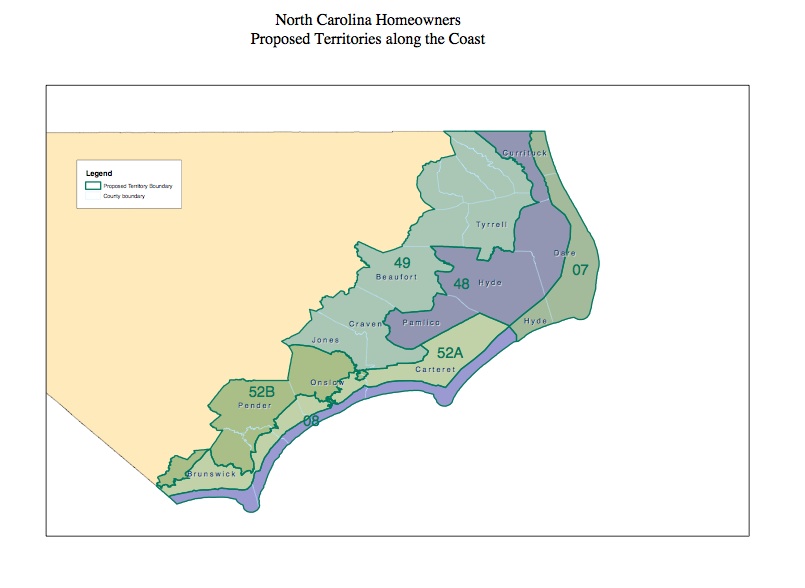 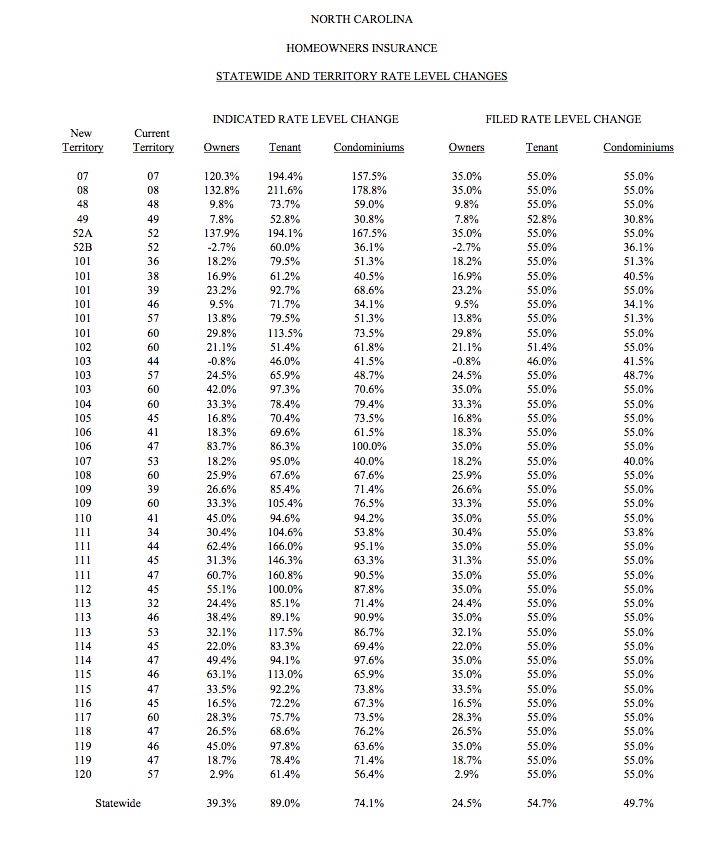 In coastal North Carolina, the requested rate changes range from -2.7 percent to +35 percent. The insurance companies have also requested revisions to the current geographic rating territories (see graphic below). The result of the territories changing means that some areas of inland southeastern North Carolina (Territory 52B) could see a decrease in rates while other areas (Territory 8, Territory 52A) are poised for a 35% increase.

Please join BASE in calling upon the North Carolina Commissioner of Insurance to resoundingly DENY the proposed insurance increase.

Written public comments will be accepted from Jan. 3 through Jan. 31. It is as simple as sending an email to   2014homeowners@ncdoi.gov    and expressing your opposition to further increases.

DRAFT COMMENTS CAN BE FOUND BELOW. Just open the document, copy, paste and email your opposition to the Department of Insurance.

-Ask the Commissioner to:

Use historical examples on your property: amount of increases in the past, number of claims made (if any), proactive storm measures you have installed at your property, etc.

For people who would like to weigh in on the rate requests in person, there will be a public comment session on Friday, Jan. 24, 9:30 a.m. to 4 p.m. in the Jim Long Hearing Room of the Dobbs Building, 430 N. Salisbury St., Raleigh.

The Insurance Commissioner issued a strongly worded statement on the rate case filing:

Also, I take offense at the insurance companies’ concerted efforts to file this request late on a Friday afternoon, when they think the public won’t be paying attention.”

The filing is available for public review on the Department of Insurance website. To view the entire 1187-page filing.

In late 2008, the outgoing Commissioner of Insurance for North Carolina approved significant changes to both basic homeowners insurance rates and the rates which apply to the mandatory wind and hail coverage (called the Beach Plan) coastal homeowners must carry. For some coastal citizens these increases meant a 30% increase in basic homeowners insurance in addition to significant Beach Plan increases including a proposed 2% deductible and highly increased surcharges.

Unchallenged, these impacts would have been tremendously detrimental to our coastal communities and eastern North Carolina as a whole. To mitigate the impacts the increases would have caused, BASE worked with our local governments, state lawmakers, citizens, industry partners and media to illuminate the issue and lead the effort for reform. To keep the issue at the forefront, BASE was frequently sourced in print and radio, appeared on WILM’s Byline:Wilmington, served on a coastal insurance panel at the 2009 Shape of the Coast meeting and even garnered a specific mention in the August 12, 2009 Wilmington StarNews editorial for our efforts. BASE has been working on the homeowners insurance for a number of years but served as the primary lobbyist on behalf of the interests of all in the 20 coastal counties during this latest discussion. However, without the support of our legislative leaders, local governments and our members, e ven a small amount of change would have been impossible.

LEGISLATIVE CHANGES TO THE BEACH PLAN

Overall, increased transparency and public input of Beach Plan activities and actions of the Rate Bureau.