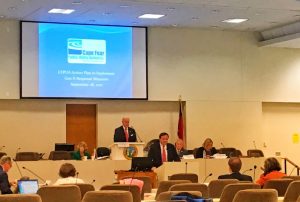 on to the GenX funding in H56, the legislature has continued discussions regarding both GenX specifically and North Carolina’s river water quality generally.

The House Select Committee on North Carolina River Water Quality met on September 28 in Raleigh. Chaired by Rep. Ted Davis, Rep. Frank Iler and Rep. Holly Grange, the committee heard from a range of experts on the GenX situation in the Cape Fear region and how CFPUA and UNCW would utilize the funding envisioned by H56 to continue to research the issue. At left, CFPUA Chairman Mike Brown addresses the committee regarding the ongoing initiatives at CFPUA.

BASE will remain engaged on this critical issue.